A sidewalk in Russia collapsed, and left a big hole in the brick. A pregnant dog named Birka wound up using the hole as her den, but it wasn’t as safe as she thought it’d be. 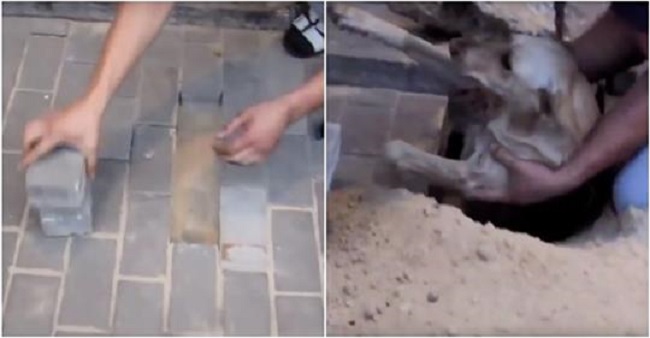 Workers saw the hole and began repairing it, but they had no idea there was a dog in it. They laid down new bricks, and wound up burying the dog alive.

Soon after, people heard barks coming from underneath the sidewalk. They alerted authorities, but they didn’t act on it soon enough. So one of the men took things into his own hands and began digging out the bricks. Eventually, he got deep enough to see the poor, scared pup.

Sadly, her puppies didn’t make it, but she was finally safe. Thank goodness for that man! Hopefully next time, workers will be more careful.Watch the daring rescue in the video below:
ALSO READ  Couple Takes In Dogs Nearing The End Of Their Lives & Shows Them Unconditional Love