Jaxson the Bullmastiff isn’t shy about showing his emotions, so when his human, Jason Floyd returned home after being away at Army basic training, the ecstatic giant dog leaps onto Jason – all 160 pounds of him! 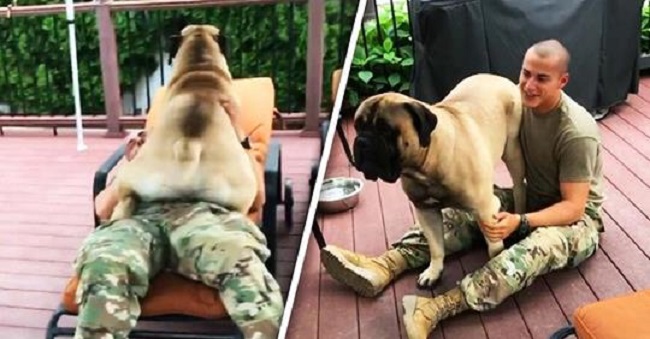 The Bullmastiff climbs on top of Jason while he’s on a chair and smothers him with love.

Jason, 19, had been away from 14-month old Jaxson for months while attending Army basic training. While he’s been away, his mom Lisa Floyd says she’s put her son’s t-shirts on pillows for Jaxson to snuggle up to.

“It was very heartwarming and loving,” Jason’s mom said, of the moment the two reunited. “I was grateful to be able to capture that so we can always have that, you know, that moment.”

While Jason was away, his mom Lisa Floyd, from Greenville, Rhode Island, put his t-shirts on pillows for Jaxson to snuggle up to as he missed his human brother so much.

Watch the heartwarming reunion in the video below.