This is one heroic dog!

A Bullmastiff mix named Legend lived up to his name after he saved his family from five armed men, who broke into their home and attacked them.

Legend was protecting Damien Strickland, 25, and Mersadie Wells-Shahan, 19, when the men forced their way into their Tampa, Florida home on Tuesday February 17, 2015. 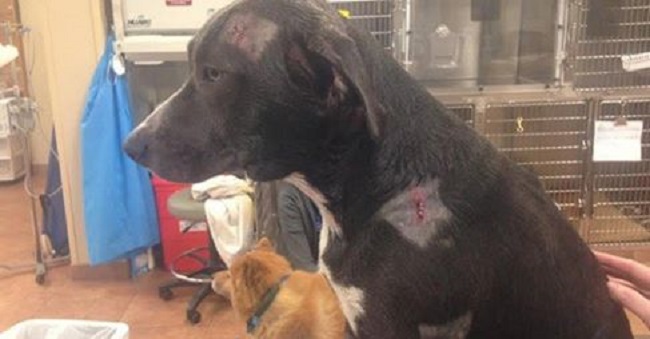 According to the Brandon Patch, the “gentle giant” bit one assailant and successfully chased off the others, but not before being shot twice in the struggle.

One bullet went into the side of Legend’s head, but luckily police arrived in time and Legend was rushed to emergency.

Sheriff’s office spokeswoman Melissa Kincheloe later visited Legend at the vets and told the Patch he’s expected to recover. He went home later that day to rest and recuperate.

Not only did Legend keep his family safe, thanks to his brave actions, police located and arrested one man a short time later. They were able to identify the suspect after seeing he was trying to conceal a dog bite!

The man is being charged with attempted robbery, aggravated cruelty to animals (for hurting Legend) and aggravated assault on Damien Strickland.

The four other men are still on the loose, but police said they expect to make other arrests soon.

As for Legend, he’s a true hero in his owner’s eyes. Mersadie told Bay News 9, “That dog saved my life.”