Thousands of people were forced to escape their houses as sirens sounded in the middle of Russia’s assault on Ukrainian cities on Thursday. Some people held their children in their arms, while others clutched their cherished pets — the cats and dogs they couldn’t leave behind in the face of Russia’s attacks. 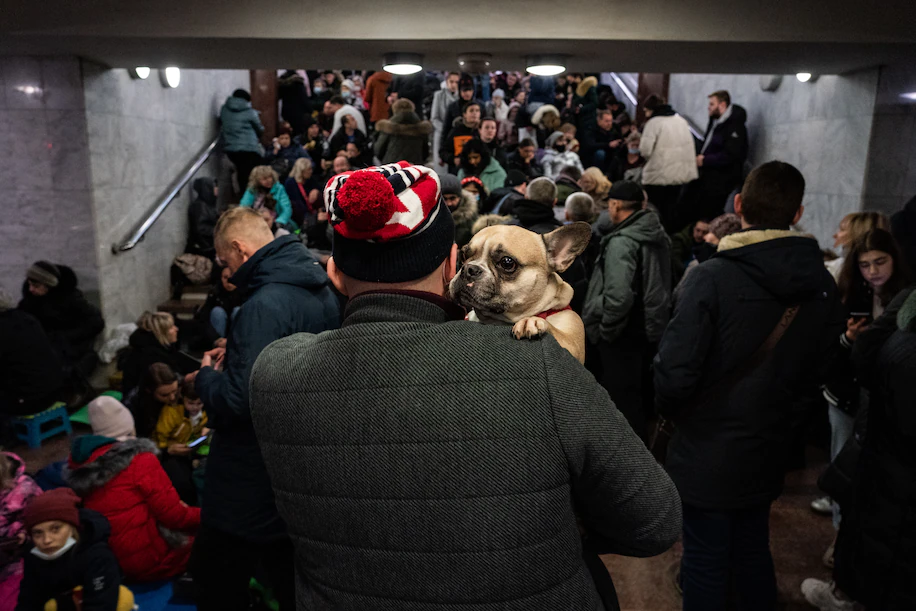 Those escaping Kyiv by automobile found the roads to be clogged with traffic that stretched for miles. Those walking hurried to nearby subway stations and bus routes, their pets in carriers.

People congregated in underground metro stations, dragging their bags behind them, in the midst of the shelling, while others embraced loved ones on the street.

Some passengers rushing to purchase tickets told Washington Post journalist Siobhán O’Grady, who is reporting from Kyiv, that they had no idea where they were going and just wanted to get out.

Casa lui Patrocle, a Romanian animal rescue organization situated in Suceava, around 25 miles from the Ukraine border, promised to aid families leaving with their pets on social media, claiming in a Facebook post that it would provide veterinary treatment to anyone who entered the country.

The organization stated that it would assist in the treatment of “any species of animal.”
As thousands attempted to evacuate the Ukrainian capital, the main highways were clogged by heavy traffic.

Despite the potential of future explosions, Uber told consumers that the service would “be available where possible.”

Images shared on social media showed long lines of automobiles, each carrying passengers looking for a way out of the turmoil.